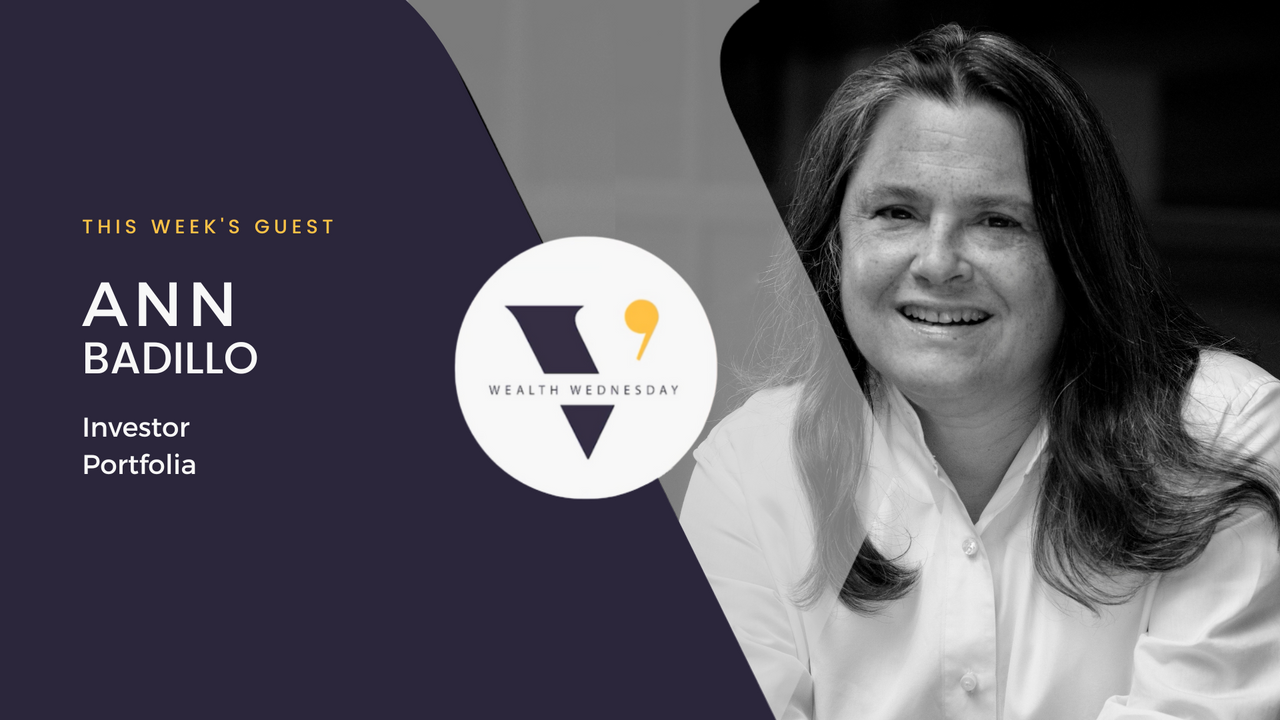 Learning for Legacy with Ann Badillo

Ann Badillo works with tomorrow makers around the world, helping to create generative futures for our children and the planet. She is an active investor with Portfolia and a member of the Eve Wealth community.

I have a few different contexts. I am a long-time strategist and executive coach in Silicon Valley and worked with Standford GSB women in management program, and also work with the International Bateson Institute in Stockholm as a warm data lab facilitator. Wore many hats over my many decades of work.

When I was around 31, we bought a house and we had to borrow $5,000 from my father-in-law to pad our bank account so we didn’t look broke. My husband had to have a house before we could have a kid and we did it all in the same month 31 years ago. We paid back the $5,000 advance from my father-in-law but he said, “Go, take this money and buy Oracle Stock”. So we did. At the time, that was the goddess in the stock market. My husband and I were young at the time, very early in our careers and there was not a lot of extra money floating around but it got us in the game. This house was also part of our first investment 31 years ago and it’s exciting what it’s going to sell for in a couple of weeks.

Originally, I’m an earth scientist.  When you study rocks, you study patterns. I’m always looking for complexity in patterns and what connects them. That is what I got through my academic training.

Early on in my career I started to work at Chevron but couldn’t stand it so I moved to work at startups in Boulder Colorado. This was in the mid-80s, early on in energy imaging and in computer-assisted cartography which eventually became Google Maps. I worked for the predecessors of Google Maps and was always looking at understanding how to look at landscapes and patterns.

I landed back in California in the very late 80s and started working for a company called ETAK which was the early predecessor of Google Maps. I had startups in my blood,  I was a startup kind of gal. Loved the wild west of all of that. It was the early moments of Apple computer and I stayed working with startups in visualization and graphics which eventually landed me at Silicon Graphics. Silicon Graphics was the cultural creator, they were the culture creators of Netscape, Nvidia, and eventually Google. The amount of creative talent and people who went on to build those companies were huge. To be part of the innovation, creativity, and legacy at Silicon Valley is how I got started.

It’s important for me to model financial literacy to my daughters. I came from a family that did not have much financial literacy. I come from a medical family and they’re all about being of tremendous service to their patients and not paying attention to their financial health. Consequently, my siblings and I had to financially support our mother for over 20 years of her life. She passed and I now have freed up some capital to actively invest. Not only is it my interest but of Stephen, my husband, and I.  We’ve done well in the market, with our financial decisions, and our investments. More importantly, I wanted to stretch it into investing in startups like what I’m experiencing right now with Portfolia.

It was twofold. Modeling for my daughters and giving them resources to build financial literacy which they don’t teach in high school. Even in a town like Palo Alto or at fancy four-year liberal art schools that cost us a lot of money.

Four years ago, I had some friends involved in a meta-currency project called Holochain. Holochain delivers the promises of blockchain with a mashup of proven tech that provides self-owned data, a distributed database, and peer accountability. I did a residency with them around narrative. I just wrote a book on narrative generation and hung out with them, and stayed at the holodeck in San Francisco for a residency weekend. Currency, wealth, and value, some little meta-questions “what is value?”. That’s what led me to the blockchain. Holochain is the next generation or evolution of what blockchain wants to do. It’s very peer-to-peer, it’s a distributed system. It sparked my interest and my curiosity.

I mentioned Holochain and they still inspire me because it’s about working for the commons. Their founder, Arthur Brock inspires me because of their ethics and integrity. They’re not just in it for the money. They are the anti-christ of Bitcoin. I looked at their coding and development community and they made an effort to have women. They were inclusive.

I always look at who’s developing, what’s next, what kind of conscious bias is there, and how we address that because, in the crypto and metaverse world, it’s very male. That’s one of the reasons why I tracked down Eve. I thought where were the women in this? It felt dystopian, how can it be more protopian? How can it be more a balanced next great brave world that we’re creating?

I was motivated by the fear of missing out factor (FOMO)  and needed something new to think about. I’m always curious to stay updated. I dove into the Twitter space and Youtube. It was too bro-ey, there were so many bros and I thought how could I trust the credibility and ethics? I was scouring Youtube and other platforms and I needed a filter for what was real and credible.

I spent six weeks surfing the internet most mornings. I got on Twitter and Youtube to listen. I started to hear the patterns and build fluency, then I found Eve and thought I could be with a bunch of women. I connected with you on LinkedIn and saw you’re an ex-McKinsey and you went to Queens. As an elder, (I’m in my early 60s now), there’s a certain level of credentials that I look for. It’s kind of old school vs. new school. I remembered I attended your One Day seminar. I stayed the entire day and got my NFT badge, that is what closed the deal for me. I was like “Okay, I’m signing up for the full course”.

It’s great to have this intergenerational learning experience. I was alive, inspired, and energized. Your colleagues are incredible and stable women. Women who are moving in, crypto savvy, and created this community with incredible belonging. I wanted to be part of the girl gang and I thought maybe they’ll let me play with them.

I also encourage everyone to follow Portfolia. I am an active investing member or limited partner there. Portfolia is a women’s venture capital firm that was founded by women and for women. We started the first-ever femtech fund. It’s all around women’s health from puberty to menopause. They have about 10  other funds around active aging, food, and tech, food and agriculture, sustainability, and rising America.

Another thing that I want to share is at this point in my life, I am very concerned about the planet and future generations. I want to make direct investments and things that get behind women or diverse founders especially making sure there is a world for the future grandchildren I may have or generations. I have a sense of urgency because the clock has been ticking for most of my life, I knew about the climate crisis. And I see that there's hope on the horizon