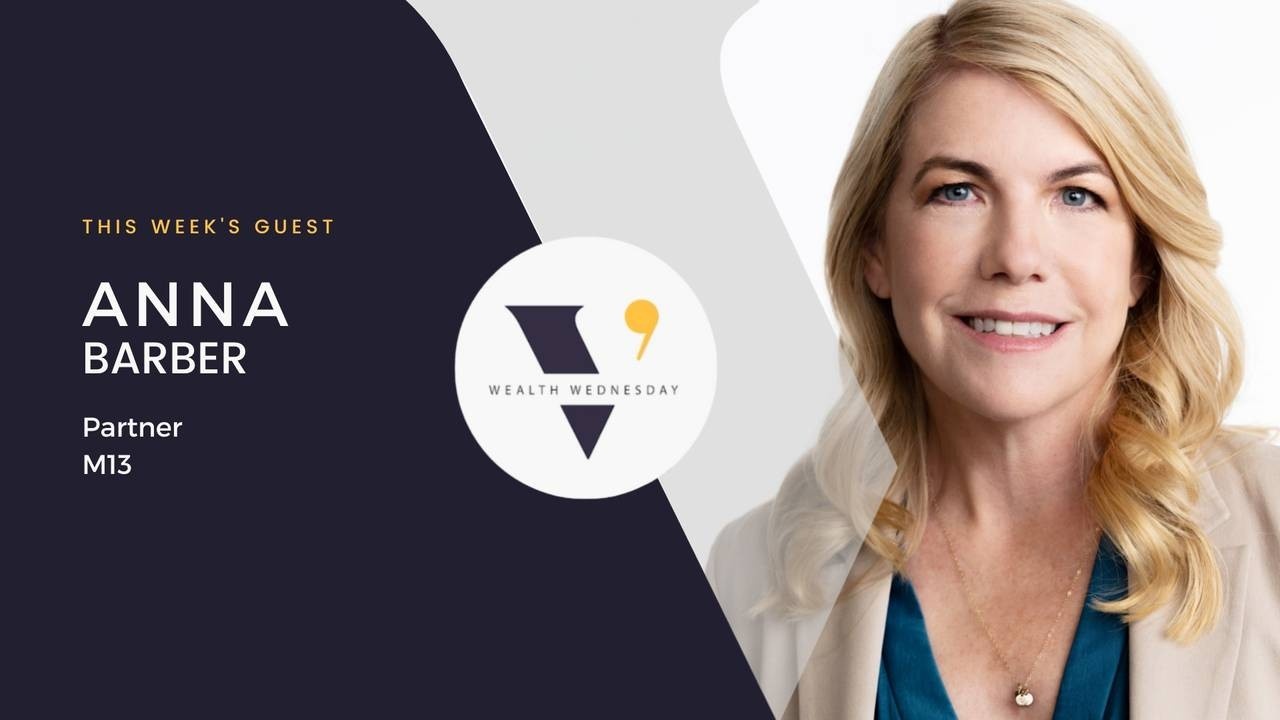 Funding the Future of Women with Anna Barber

Anna Barber is a Partner at M13 🚀, an LA-based venture fund investing in the future of consumer behavior across fintech, commerce, health, and work. Anna was previously the Managing Director of Techstars LA and a founding partner of the Fund LA and has led investments in more than 100 companies. Anna’s core investment areas are e-commerce infrastructure and the future of work.

Her mission is to support women and other underrepresented founders in building world-changing companies. Her career has included stints as a corporate lawyer, McKinsey consultant, product executive, and entrepreneur in ed tech, retail, and e-commerce. She’s also a certified executive coach. Anna graduated from Yale and Yale Law School and is a proud native New Yorker now happily #LongLA.

Back in 1999 in web1.0, it was popular to get into the friends and family rounds of fast-growing tech companies. I invested in etoys, an e-commerce site to sell toys. It was essentially the digital version of Toys "R" us. It didn't turn out to be a great investment but that became the first dot-com bubble. We were all trading shares in each other's companies and thinking we were all going to the moon at that point.

My second investment was Bitcoin which I bought in 2010. I bought it for around $1 or $2 and I immediately sold it when it was valued at $30. I got spooked and scared because, at the time, there was no community of people talking about investing so I make the decisions on my own. Of course, I would kick myself frequently for that decision but it's an important lesson of having the patience to hold things for the long term.

I am an accidental investor. I sold the company that I founded and went on to work for the acquiring company for a while. I started to realize I had miscalculations and blind spots as a leader or CEO. I got interested in helping other entrepreneurs to uncover their own blind spots, so that they could grow their companies and continue to scale themselves as leaders. I was studying to be an executive coach and my plan was to be a founder coach. I was doing angel investing on the side but didn't have it in my mind to invest as my career. I then got the opportunity to be considered for the managing director position at Techstars LA. I thought it was a great place for me to sit and be able to work closely with founders and do the work I wanted to do. The investing part was just a side benefit. I started doing it and fell in love with it - it was a great way to be helpful and supportive to founders while having your interests totally aligned. Rather than charging founders for coaching services, I was able to give them money, my time, and my expertise to help them build their business - which was compelling for me. That happened in 2016 and I've been investing ever since.

When I moved to M13, still in an investing role, I had the opportunity to deploy capital into businesses that I think are going to improve the world. While I don’t invest exclusively with a gender lens, many of the companies I invest in are founded by women that serve women. As a venture capital fund, obviously, our goal is to generate returns for our limited partners- but I believe we can do that by investing in companies that improve the way we live, the way we work, the life of our planet, and the economic condition of women. I see it as a real honor to be able to play the role of deploying capital in that way.

Something that I've learned and helped me propel forward is the value of the word "yet". People would say things such as "That's not something I know about", "I can't do that", and "I've never tried that". For any of those words, if you add the word "yet", a whole new possibility comes up.

If you look at my career it doesn't necessarily make sense. I was a corporate lawyer and then a founder of a company. From being a talent manager into a VC. At any transition point in my life, I was doing something that I didn't have any skill or experience with. I built a skill of learning, of being able to ask great questions, and have a curious mind to get up the learning curve. That concept applies to investing and developing mastery in any area.

That lesson is something I always try to impart to other people that I worked with and also to my kids. Don't have that fixed mindset. The power of future possibility.

Some people whom I think are doing really interesting work are Beatriz Acevedo who founded Suma Wealth - A fintech education platform for the Latino Community in the US. She has a voice and the ability to speak to that audience. She's tapping into an audience that has a hunger for financial education and delivering it to them in a way that speaks specifically to that audience. I love the work that she's doing.

I’m also inspired by Jessica Chang, who is building WeeCare- an employer solution for childcare.  WeeCare provides a employers with an affordable childcare benefit - so their employees can have access to high quality and affordable childcare.  What makes the company work is that the childcare is provided by a network of licensed in-home childcare providers. Everyone involved benefits - the employers because their employees show up to work, the employees themselves, and the small business owners operating these home daycares.  This is how the economy should work.

Start small. Diversification is your friend. Invest in communities such as Eve where you can get financial education. Educate yourself and then decide on the way when you're going to take it out or sell it. If you don't have a plan, It's hard when things start to go south. It's important to have discipline in going in about your time span for investing. I think diversification is also important. Putting all your money in one company isn't a great investing strategy, more like gambling than investing. You need to do whatever way you can to build a diversified portfolio.

I am on Twitter at @annawbarber. That's where I tend to spend time when I'm on social media. I'm also on LinkedIn and our website is m13.co.

Have thoughts on this week’s topic or questions for me or Anna? Post your thoughts in the comment section. Until next week. 🙂