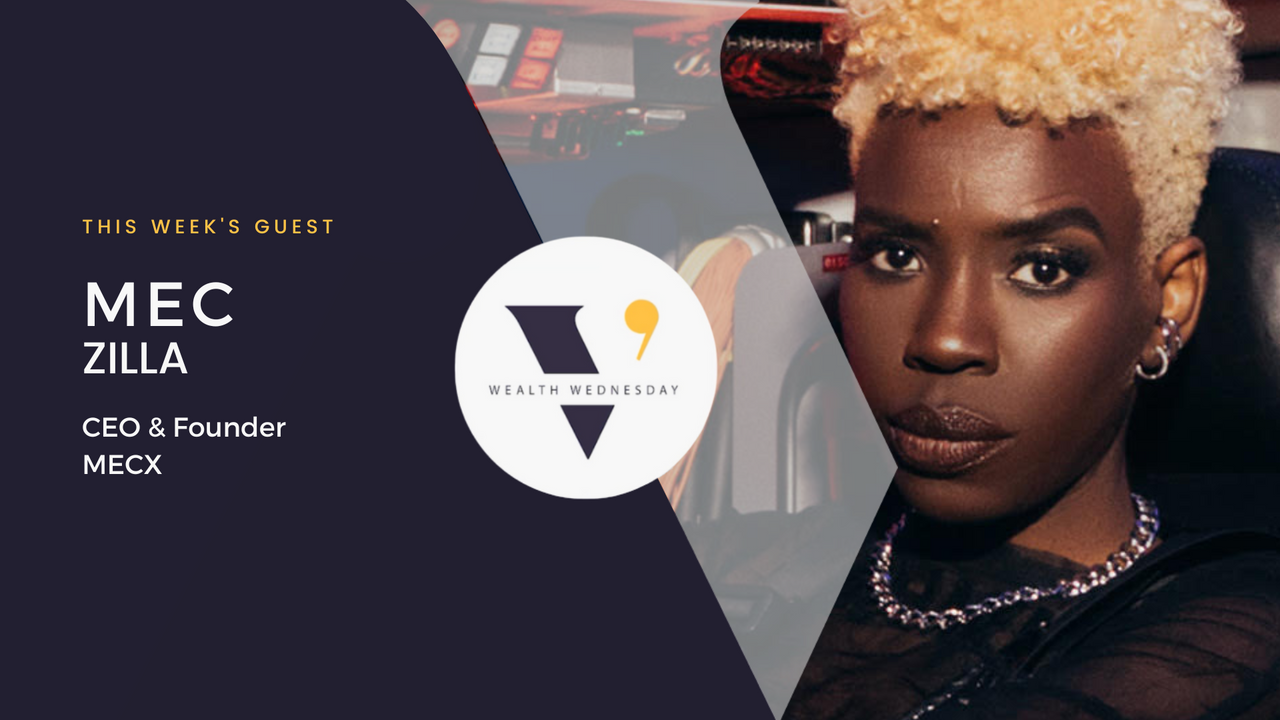 Crypto and Culture with Mec Zilla

mec . Founder at MECX DAO / Innovation Consultant at Deadfellaz is a Multi-Disciplinary Artist and Web3 + NFT Educator who is currently on a mission to onboard and upskill 10,000 non-white guys into the Web3 space and advocate for a more fair and equitable Metaverse.

Having been in the Web3 space since late 2020, she is operating as a Web3 + NFT educator, DE&I advocate, and consultant to brands like Converse, Jordan, Nike, and Springhill/ROBOT as well as personalities such as Steve Aoki/@A0K1VERSE, Snoop Dogg, Gary Vaynerchuk, Spike Lee, and Tyson Beckford.

I had a stock market game at school. It was sort of like making bets on things and trying to make the gains or losses. We didn't have actual money invested in it so it didn't stick to me at all.

My first formal investment would be Bitcoin. I was trying to make a purchase and they only accepted Bitcoin. I ended up buying 2 for $75 each, but didn't make the purchase and had no idea what to do with them. Eventually, I forgot about them not until I started hearing news about Bitcoin after 2 years. I looked through old emails and found them valued at $600 each so I quickly sold them.

In a less traditional sense, I would say my first-ever investment was in myself. I remember buying cadies so I can sell them at school. It was my version of a lemonade stand. I grew up in the city and went to a big school where there were around 4,800 students. I hung out on lunch a lot and noticed we didn't have candy or snack machines. I was already visualizing the money I would make so I gave my mom money to buy candies for me and I became a candy mobile.

It's partly the lack of understanding about crypto. I was trying to understand how CryptoArt works, and what it means. When I started to dig into what it was for me, It was a smart contract. I remember hearing conversations about Kerry James Marshall's retrospective. He's a prolific black painter who at the time was being honored in this retrospective collection. He decided to make that conversation about the issue that was happening when The Chicago Library Fund sold his artwork without his permission. They put the mural he painted 25 years ago on the auction block. For me, it was like, what does it look like for an artist who's committed so much to the world culturally not to be able to retire because once you start making work, you've never paid on the sales of new work? Despite the fact that it's millions and millions of dollars being sold. When I discovered the smart contract as a way to legitimize that a person owns the work and that there should be a royalty attached to it. I don't think this feels safe but this is better than what we have.

There are layers of friction that I was experiencing when I first came into this space. Probably because I discovered the space very early around December 2020. I think people who were onboarded today have a much easier time where there's google and more user-friendly tools. At the time where I came in, there was no documentation and no articles are being written about it. If you don't understand crypto and web3, the technology and engineering - You're going to have difficulty. It's also going to be difficult if you don't have networks of people that can bring you in and give access to things. If you don't have disposable income, you can't participate. Seeing all this friction feels like a call to action. How can I alleviate those frictions? One is to be visible and become an example. We can't become an authority on something we haven't actually done.

I started to sell some work to fully understand how the space works and aluminate to people what I had to learn in order to effectively do that. I studied how some of the tools work to get a smart contract written and how to build communities. People encounter difficulties in this space and I wanted to distill some of what I learned to expedite their journey. The idea is that a person could get in into the space in just 4 weeks instead of 4 months. Helping people get to a point where they could execute a project was the goal.

What excites me the most is when people understand how space works.

One of the things I say all the time to people is NFT is when PTA moms learn how to spin up a DAO instead of doing a bake sale. It is similar to home-grown impact-driven-mission-focused technology and commerce. Things that you care about are amplified in so many ways through technology and commerce. Once someone who's making this concerted effort over a two-week period, rallying all these people together, you're only appealing to your local school. You're only limited to how much money you're going to raise. You can do $2,000 in big save money and take your kids on class trips but what does it look like? To have those kids draw muffins and you bake nothing at all and sell those drawings to a global market. The idea is that you get around 10x or 100x with the same effort if you just understood what it looks like to build a community around these kinds of ideas and use this technology to leverage a larger group of people to commit to that cause.

I will always default to Betty from Deadfellaz. She's the Co-Founder and creative producer while her husband is the artist for the project. They were running an agency before the space and worked well together. They executed one of the most inclusive-looking projects I've seen. It was the first NFT project where I was drawn to the characters and felt like I actually wanted to buy them. The time that I saw their project I just got back into the space from a break. I started getting conversations around building technology and that's not my wheelhouse then when I came back into space, it was August and they had just launched. I missed the mint but I was totally blown - I couldn't even understand why I like it so much. They were so cute and it feels like the art was speaking to me. That project got me out of my web2 head when someone gifted me one NFT. I was complaining about how I missed the mint and tweeting about it. A community manager of another project was very friendly and reached out to me and he said, "I've got 16 of them. Here's my wallet - pick one." I declined and said no because there was no way I would take thousands of dollars from a stranger. After then, they had a metaverse party for Halloween and I badly wanted to come. Eventually, I gave in and picked one NFT. He sent it to me when I got home and I got to experience the utility of adding one. That was when I realized that you're not buying the image but rather the access to the community. The way that they build this project isn't just about buying something that you could sell, It's about being part of a group of people. The artwork was thoughtful. I'm staring at it as a designer and am impressed. Now, I'm part of a community of people who appreciate art. They eliminated layers of friction that people would see so it feels inclusive. The community and things that Betty advocates for are all aligned with the way that I feel about the space and what we all should be doing.

There are other groups like Expansionpunks. There's an interesting story about it on a guy who worked at Microsoft together with his daughter picking one NFT out. His daughter pointed out that none of the female characters were smiling. He started examining the collection and did his best effort to match the artwork and then expand it. Now the collection has non-binary characters and women characters that are smiling. The idea is we create communities where people who want to be seen can be seen in a way that they want to be seen.

My favorite advice to give people who want to create something in this space is to bring problems to the space. I think the space is people-centric and well-suited for interpersonal community efforts.

People ask me about how to build community and I would answer I don't know, I don't have a formula, and I'm not trained in this but I speak passionately about the things I care about and people find me. That's because I bring problems to the table. The problem that I happen to want to solve can be a shared pain point amongst a lot of people in my community. When they hear me talking about it they would feel the initiative of helping and solving those problems.

When it comes to scaling a community, how do you create the ability for others to take and transmit the same message?

I was in the clubhouse for 4 months and gain 30,000 followers not because I'm popular on the internet. I realized that talking about what I care about, and sharing information I was learning made these people follow me so they can hear more. It got to a point where I started spaces with a title like what do you all want from me? Because for me, it did not make sense. I came from a different world and approach and I started to think there was a missed opportunity. It felt like an obligation to tap into this energy of all these well-meaning people.

Scaling became the problem. I don't want people to wait for me to wake up to learn something. I was doing 16-hour spaces. I was living in it and I was fine with it because of the way that my brain is wired - when it's on, it's on. I never complained about it. I'm mindful of my own wants in life and I know when I'm overextending already.

Twitter is the easiest way right now because I spend most of my time there. I also have a linktree that goes to everything else. In the future, there will be some kind of public good because I realized there's still a need there.

Have thoughts on this week’s topic or questions for me or Mec? Post your thoughts in the comment section. Until next week. 🙂