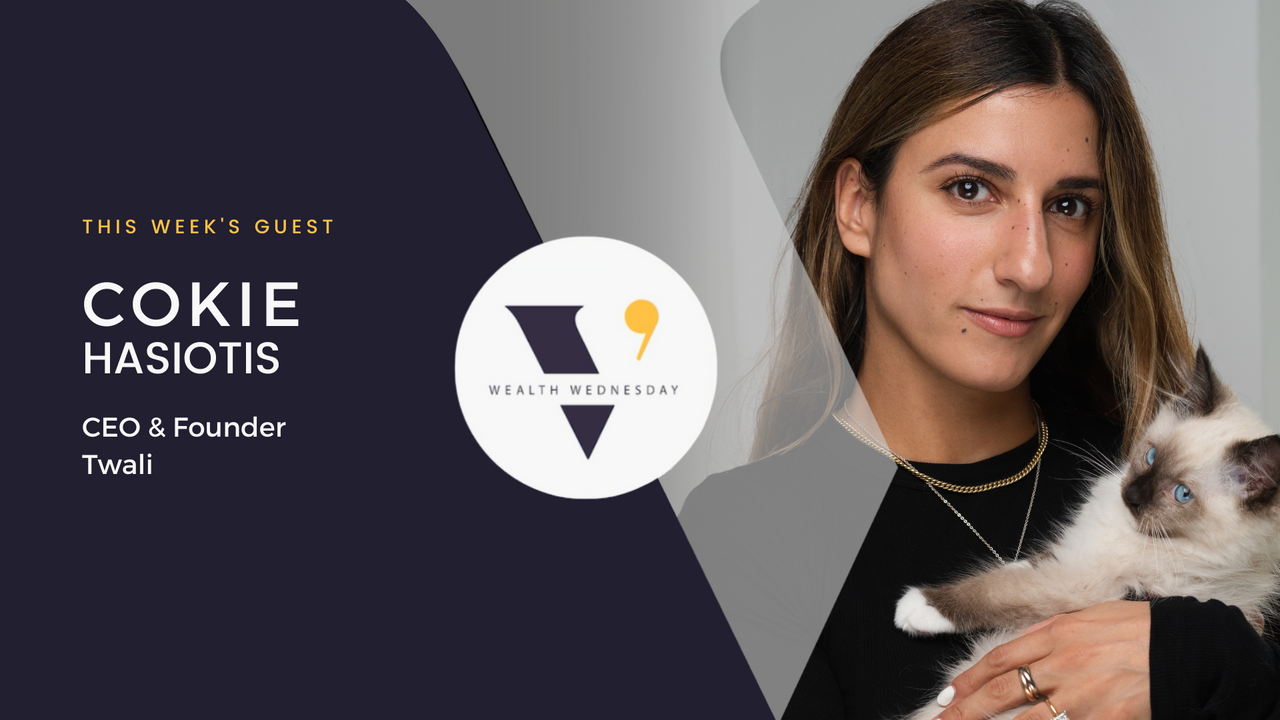 Cokie Hasiotis is the Founder and CEO of Twali, a decentralized marketplace providing web3 projects access to a vetted community of non-technical experts across a range of verticals, including accounting, legal, compliance, marketing, and many more. Cokie is a Venture Partner at Compa Ventures, where she invests in international web3 founders. She’s an advisor and/or investor at Ejara, Daylight, Otomo, and Guava.

Prior to Twali, Cokie founded Lasagna Technology, a micro consultancy focused on financial infrastructure, where she worked with banks, fintech, and ultimately built Stripe Crypto. Cokie was Chief of Staff at The Block and a founding team member of Fintech Today. She started her career in investment banking and led global fintech research at Boston Consulting Group.

For many years, I was an investment banker in London. What's crazy is investment bankers in the US make a lot of money but in London, it's the opposite. I make around 33,000 pounds a year and a 500-pound bonus but it was mostly tax. By the time I was leaving London to move back to New York, I was heavily in debt. I got my first American tech job that pays a whole lot better. I started my first company Lasagna which was a micro consultancy. I was able to diversify my income and paid all the debt that I had which was a huge relief - It felt like my lungs could finally breathe. I was extremely excited to start building a financial future that did not include horrifying debt experience.

My first investment was around $700 into Apple over a period of 3 months. I was heavily invested in a number of tech stocks but I eventually got bored. I then bought Bitcoin and never looked back since.

It all started with my company Lasagna. Lasagna unlocked something for me that nothing else in my career ever has. Lasagna Technology was a micro consultancy that is focused on financial infrastructure. We worked primarily with banks, fintech, crypto, and web3 companies. We were live for 12 months, working properly for 18 months, and made 7 figures in revenue. Our last project or job was building what is now called Stripe Crypto. Now that may sound very impressive I must have had an amazing team- We were 2 people.

Expertise and execution in what was essentially a product strategy house that created unprecedented economic mobility for me and my Co-Founder. Me and Will White my Co-Founder in Lasagna had something really special but candidly we're not that super special. There are tons of people just like us who have this level of expertise and we wanted to unlock it for the rest of the world. If it could create this level of financial change and a satisfying way where people can choose how they work. I believe the future of work is paid and paid well, the future of work is more chosen than it is given - We wanted to build that kind of system. To help people come and realize the stream, even if you're just starting out or you've been doing it for 10 years. That is what we've been focusing on and it is an interesting journey so far to see how people wanted to be involved.

Diversify your own income. Twali is an income diversification source which is inherently the best way to build and create wealth. We can all talk about coins, our stock, our equity but that often more doesn't create the economic reality that a person wants. Overwhelmingly diversified income does - it's a lot less sexy and it's not an overnight millionaire but it is about consistently making more than spending. Consistently putting away something and leveraging it for me. I think it's the best way to build wealth, to future-proof yourself, and make yourself less dependent on your job and make them more dependent on you instead.

Initially, we were thinking a lot more about the token today and not about the governance or the community aspect. What we're trying to do is make it easy from both sides. On the client side, there are web3 projects we've worked with to make it easy to source vetted talent. On the other side, if you are in our community and a member of Twali network, we make it easy for you to get to work. Ultimately building that tool and infrastructure which is way more important than feeling good and being a member of something because we're not going to derive a huge amount of token value until the next bull run. We do believe that our experts should own this with us whether it's an NFT, token, or some other delineation that we'll make up in the next couple of years. Experts from big or top consultancies had to work 30 to 35 years minimum to become equity partners at their firms. They had to pay millions of dollars when they get to that place but in Twali, it's like sharing it together, today.

If we think about talent networks, it's about putting the power back in the hands of the talent. Changing the mindset that everyone in our network is an employee. They're their own employer - micro employers instead of the employee-employer relationship.

We are kind of thinking of going in a different direction but for now, Twali is a very niche marketplace with very niche experts. It's never going to be super big but it will be incredibly impactful and already has been. What we're testing is if the marketplace infrastructure that we're building works at scale because our belief is that the future of freelancing is service DAOs. What we'd like to do one day is create a marketplace infrastructure for those service DAOs to run better allowing others to web3 projects like Seed Club to own their talent in their network instead of passing stuff off to us. We want it to be more of an infrastructure move than becoming a single-serve marketplace.

Founder of Indie DAO, Katy Jeremko. She previously worked at NASA, incredible, and brilliant. She and I complement each other in a lot of ways and think about the future of working together all the time. She's a constant inspiration to me and she is relentless. I am excited to see what Indie DAO does and our partnership with Twali. We joke that our companies are dating.

One thing that I want listeners to take away is that there's no blanket I can give you except that when you are pricing yourself, you're underpricing significantly. A lot of the time we take our salary, we split it down to what would be our hourly rate, and we feel like that is too high. No, stop doing that. You have to buffer your salary because you're not being covered by health insurance, etc - there are a lot more costs associated with your freedom. Bump up your cost. You cost more than you think. If you've done anything for more than five years, you're an expert on it. Stop talking about yourself out of your just desserts.

Have thoughts on this week’s topic or questions for me or Cokie? Post your thoughts in the comment section. Until next week. 🙂