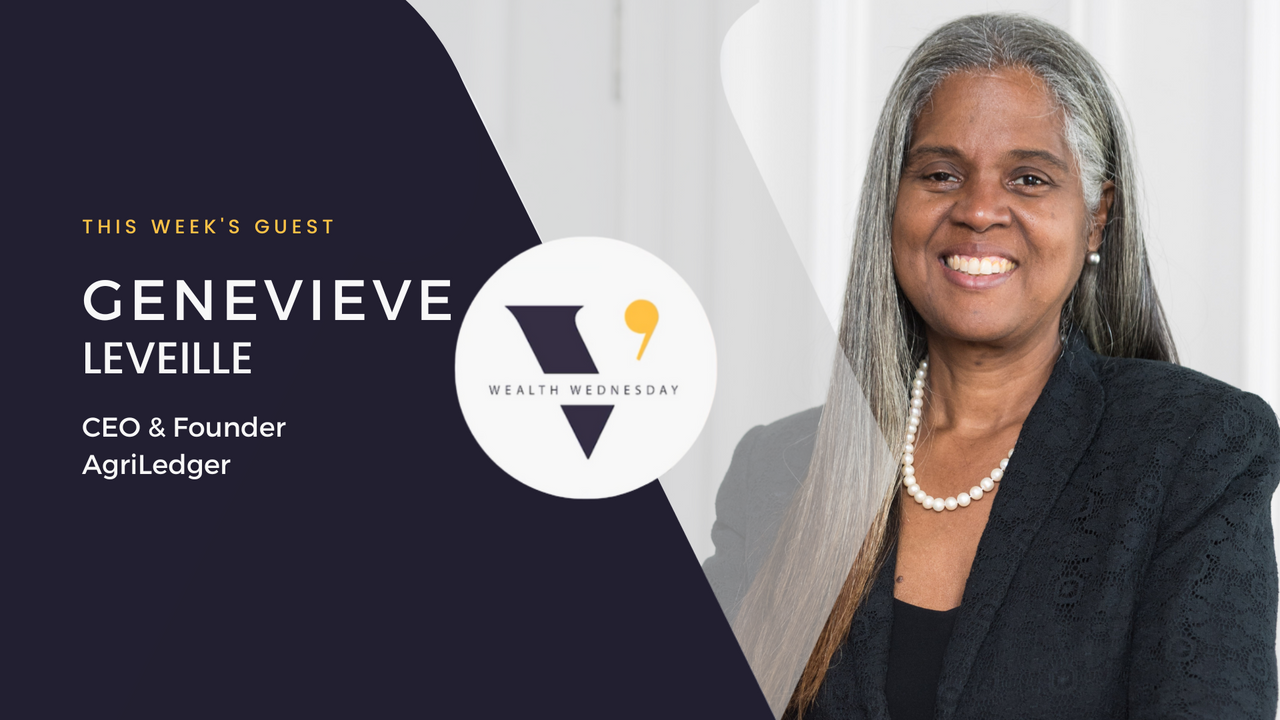 Genevieve Leveille is the CEO and Principal Founder of AgriLedger, an award-winning blockchain solutions company offering equitable and sustainable solutions to challenges being faced across the agricultural value chain.

Originally from Haiti, Genevieve is a social impact entrepreneur who has spoken at numerous conferences globally on emerging technologies and has been recognized multiple times for her work in technology and decentralized finance (one of the Most Influential Women in UK Tech – Computer Weekly, 2021; Top BAME in Technology UK nominee – Financial Times, 2019).

She currently serves as vice chair of techUK’s Distributed Ledger Technology Working group and is a Non-executive Director and Board member of FinTech for International Development (F4ID).

In Crypto, I was interested in technology but not for the purpose of investing. I was curious about how money moves in the crypto world. Although in the '80s, I was one of the first people who tried online investment and I still have my holdings.

For the last few years, I've been only investing in my company rather than investing externally.

I experienced a few health scares before. The first one was Deep Vein Thrombosis with Pulmonary Embolism which I found out exactly on time before getting on a flight. If I had gone on that flight, I would not have survived. A few years later, it turned out to be Lupus Anticoagulant. My cycle was bad. My doctor said it should have been caught earlier and what it ended up being was Endometrial Cancer. Having experience working at Sloan Kettering, I knew exactly what to do so I project-managed the whole thing.

I experienced menopause at 38 which is earlier than it should have been. I didn't get any support in terms of chemotherapy and other healthcare services so I ended up gaining about 120 pounds. Because of the extra weight, I started having high blood pressure, cholesterol, etc. I then decided to finally lose the weight to take care of myself. With all these experiences, I've seen death at the door. This led me to a journey where my purpose changed and I wanted to stop working in a corporate world where I was making money for somebody else.

When I uncovered blockchain, it was a fluke. First week on IdenTrust, my boss Karen Wendel called me and asked me to go to South Africa to learn Blockchain. I got to meet Jed McCaleb and Joyce Kim from Stellar. The journey also included the early team from R3 and Simon Taylor who at the time was at Barclays leading their blockchain practice. That whole summer was amazing - I got to meet very interesting individuals and dive deeply into how the technology of blockchain works. At the time in the crypto space, there were only around 500 enterprises globally exploring. I realized how important this was for people to understand.

Can you share a little about AgriLedger, The story of Haiti, and the Coffee Market?

When we go to the supermarket, we make a choice. That choice can be based on our wants and ability to pay. From our payments, only that fraction of it goes to the farmers. This is the case not just in emerging or developing markets. In 1800, Haiti was the largest exporter of coffee, sugar, and cocoa globally. It was responsible for 40% of the French GDP. When Haiti got its independence, this caused a huge hole in France and they had to for their freedom again. We thought it was $40 million at the time but it was actually $112 billion in today's world.

The coffee producers and makers were the ones who paid the debt. In the '60s, Haiti exported more coffee than Kenya in the present day. This is due to the lack of trust between the farmer and the market. The farmer doesn't know what is the price that the market received. The farmer sees a price in the market and compares it to what he received - is only a fraction or around 2% only without understanding what is happening in between.

I worked on a project with the Haitian Government (Ministry of Commerce and Industry and The World Bank. What I loved about it is they were not looking to just put a blockchain. They looked at the value chains, who are the players, what's the needs, what's the story, and how we create trust. What we did was to demonstrate that it could be so much more in the systems. Over 750% could be brought back to the farmers and we give it to them on the first run. We were imagining creating a decentralized financial model because the funding mechanism is missing. How do you fund the farmer? There are ways we've looked at such as a micro fund and the exchange of information. The ESG data that is received and created by the farmer be sent can be sent up the line to others. Those instruments must be used in a trusted way to create a data repository that allows us to see the story and react quickly to the needs.

Can you share with us the software that you're building and what role it plays in the wealth space?

We built a blockchain solution using the R3 Corda platform. What it does is it tracks the commodity and allows each party to measure it in a different way. You can call it a bushel, I can count by numbers, or someone can do it by dozens. The system can have those different translations which allow us to speak in our personal language. Commodities are being tracked as they go further down the value chain and gain more value. When payment is made, everybody gets their payment at the same time. We always think of the movement of the supply chain from bottom to top and tend to forget the people who have participated first. We start having this timeline so everybody can get paid at the same time. We also used a tool called Twilio to send text messages to the farmers for updates on the goods. Our aim was for the farmers to not be required to have smartphones but only basic phones that can be used for communication. They will get an SMS when the goods have arrived and how much are they getting paid. Farmers can then decide on their own which was a wealth builder for them because it allows them to make choices and understand.

The challenge starts on day 1. I am happy and welcome what I would call competition. Competition means you have an idea and if you can have coopertition where you collaborate with your competitors - you can serve the community better.

I'm probably one of the first ones who used technology like Corda which was considered expensive by the bank. Most farmers in the world are 40% of the poverty line in most countries. I wanted them to have privacy. Unfortunately, I couldn't do it in the backend because if I didn't talk about it, It wouldn't allow others to understand the pain point that I'm trying to fix.

Being compassionate has a lot of bearing on our lives. I had to make a choice, to be out there, and to become a voice. As we make good decisions to help others, we also make people mad. I had an experience where someone would go out of their way to vilify me. Don't let that deter you from what you've built. I have built something that is valuable and had demonstrated the changes that it can make.

One thing I learned from my mother is to keep at it. Don't let anybody tell you you're not good enough. Whatever problem you're solving, keep going, and if it doesn't work just pivot it. Pivot is okay - that's how changes happen. This space changes at a drop of a penny so make sure to continuously educate yourself. Be ready not to take everything at face value. For me, it's also a duty to educate others. This gives me the opportunity to revise my understanding. We need to make sure that education is out there and that we empower more women in this space.

I did decide not long ago to make everything the same. It's @mgleveille on all platforms. agriledger is also agriledger on all platforms. We're not pumping our horns as much as creating knowledge and information. I welcome competition because that means something better we'll come up with at the end. It'll either push me to do it or somebody else will have the right answer. That's the only way we're going to make the world a better place.

Have thoughts on this week’s topic or questions for me or Genevieve? Post your thoughts in the comment section. Until next week. 🙂